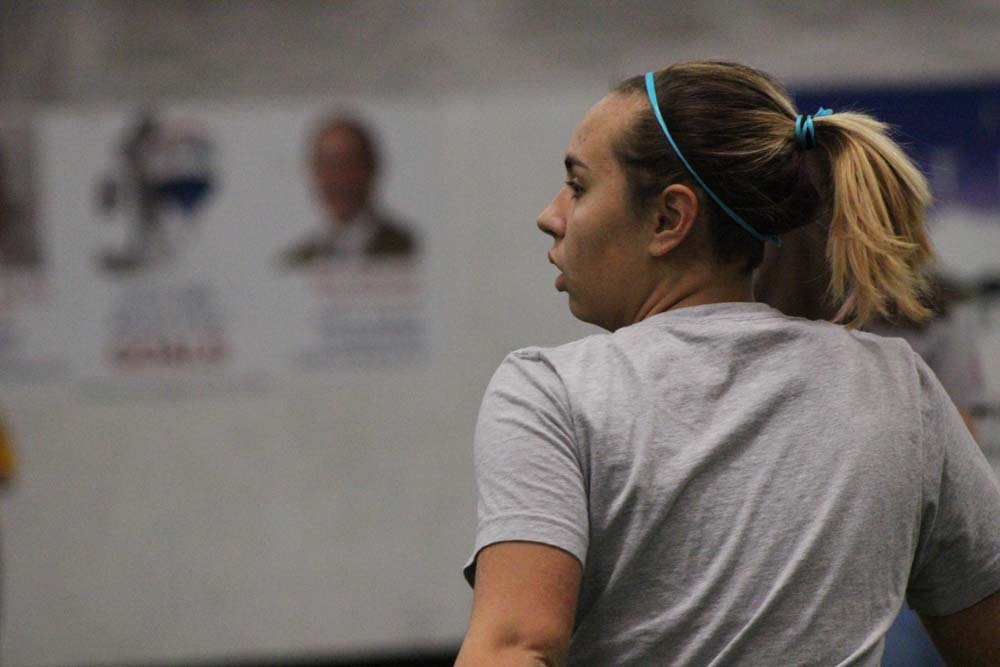 Jen Cole (11) is one of the captains of Girls Soccer Team. (Becca Heiniger)

Jen Cole (11) is one of the captains of Girls Soccer Team.

With soccer season fast approaching, the girls’ team made an executive decision to start practicing earlier to ready themselves for the season. In past years, there has rarely been preseason at all and much less one that started this early. This year, the girls want to come in strong. They would rather spend their off-time getting in shape than waiting until the beginning of their season.

Chip Spangler, a volunteer who has coaching experience, was the person who decided to have preseason practices. He and many other coaches help the captains lead the practices, which are every Monday and Wednesday. The team captains, Meghann Root (11), Georgia Findlay (12) and Jen Cole (11), lead the warm ups. Then Kevin Dlugos, the assistant varsity coach, works on ball control and other drills with the girls. He is stepping up as the assistant varsity coach by taking on more and more tasks, including helping with pre-season.

Many coaches help out with the pre-season practices, including Coach Hilary Lewis. Coach Lewis is new to the high school teams, but she has coached for the middle school. She will be the co-coach for the Junior Varsity team with Sean Patterson. Both Coach Dlugos and Lewis cover cardio and strengthening.

Tim Owen, who has coached for Manitou before, specializes in training the goalies.
It’s the coaches’ goal to use the preseason practices and indoor games help the team get used to playing with each other. They want to mainly help the freshmen get their speed of game to the high school level, and get used to their new team. The coaches and captains use specialized drills and work outs to help the freshmen. But it’s not just the freshean who have to get back in shape, it’s the entire team.

Everyone has their own expectations for the team. Coach Dlugos just wants the team to be in shape and healthy. He wants to prevent as many injuries as he can. Root wants the freshmen to push themselves and get in shape. Naiya Budler, a sophomore on the team, not only wants the team to get in shape, she wants them to maintain their good shape.

Mylea Harangozzo, a freshman, would like to use this early start to get in shape and not waste the beginning of their season doing so.

The main differences between preseason and normal season are the games. Indoor games have a quicker pace because of the smaller space and fewer players. The quicker pace can lead to many more shots being taken than an outdoor game. Most players like outdoor better, because it works their strengths and weaknesses more than indoor. Outdoor works these more because it is slower and works on strategy, and not just working their speed.

During preseason, the girls have a very different focus than they would in actual season. Preseason is very relaxed and loose, but the actual season is more intense and passionate. Losing a game in preseason doesn’t affect the team in the same way as normal season.