Preview: “The Last Illusion” pays Homage to Houdini through Magic and Drama 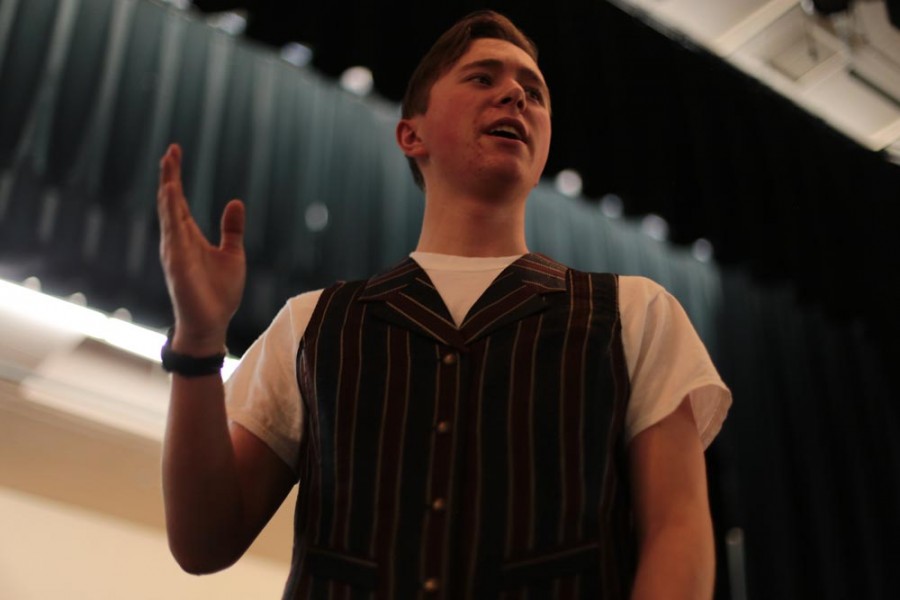 Gallery|14 Photos
Aubrey Hall
Morgan Baker (12) delivers a brief monologue in which he asks the audience whether they are holding their breath alongside Harry Houdini (Bennett Cross, 12), who is trapped inside of a submersion tank, attempting to escape.

The theatre department is hard at work preparing for their annual winter performance, the one-act play. The cast of twenty-one students spent rehearsal on Wednesday, January 21 practicing magic tricks, trying on costumes and climbing inside of a wooden crate.

The play is “The Last Illusion” by B. Dwayne Craft. “It’s about Houdini. It’s kind of a mini history of Houdini’s life, so it touches on really specific instances that most people would know,” said Wendy Harms, director.

Andy Covington (12), stage manager, said the play could be described as, “Houdini’s last memories before his final trick.”

Harry Houdini is played by Bennett Cross (12), who has been a part of the school’s theatre department since sixth grade. For this show, he has been taught magic tricks by local magician Bob Hill. “Because it is about Houdini, the script calls for two specific tricks,” said Harms, “One is called the substitution trunk.”

The substitution trunk is a metamorphosis illusion that acted as one of Houdini’s signature performances. In the play, Nathan Plush (10), who plays Theo Weiss, stands atop a large, padlocked wooden crate before being magically replaced by Cross. In another trick, Laurel McKenzie (12), who plays Houdini’s wife, disappears in a matter of seconds.

At one point in the play, Houdini (Cross) asks Paul Daniel, played by Matt Rivera (11), to build him a submersion tank. Daniel, who is a good friend of Houdini’s refuses, claiming that such a contraption could kill him. This isn’t the first time Cross and Rivera have acted together. The pair starred in “Servant of Two Masters” as well, which was performed at the beginning of the school year. Other returning actors include Morgan Baker (12), Samantha Bishop (12), Thomas Hudson (12) and Luke Ganger (12). Hudson, who was one of the leads in “Servant of Two Masters” now plays the role of George Lewis.

While the actors are nervous and excited for their competition coming up in two weeks, there is little stress and plenty of laughs within the group. At one rehearsal, Harms hid in the substitution trunk during a scene in which Hudson was supposed to open it up. When he did, she jumped out to scare him. The cast, while erupting with laughter, helped Harms out of the box and began recanting stories of similar occurrences in past productions.

The cast, which is large for a one-act play, is filled heavily with seniors. For ten of the twenty-one students in the play, it could be the last time to perform with the Manitou Springs High School theatre department.

Mia Elliot (12), who plays Margerie Crandon, has taken up a bit of a leadership role on set. At rehearsal, she led a warm-up exercise in which the cast belted out the story of a rabbit in unison. Her nine senior co-stars joined in, along with the rest of the cast.

The one-acts competition is on February 5 at Mitchell High School, where twelve local schools are performing against each other. Supporters are encouraged to attend. The play will be performed at the Manitou District Auditorium on February 6.