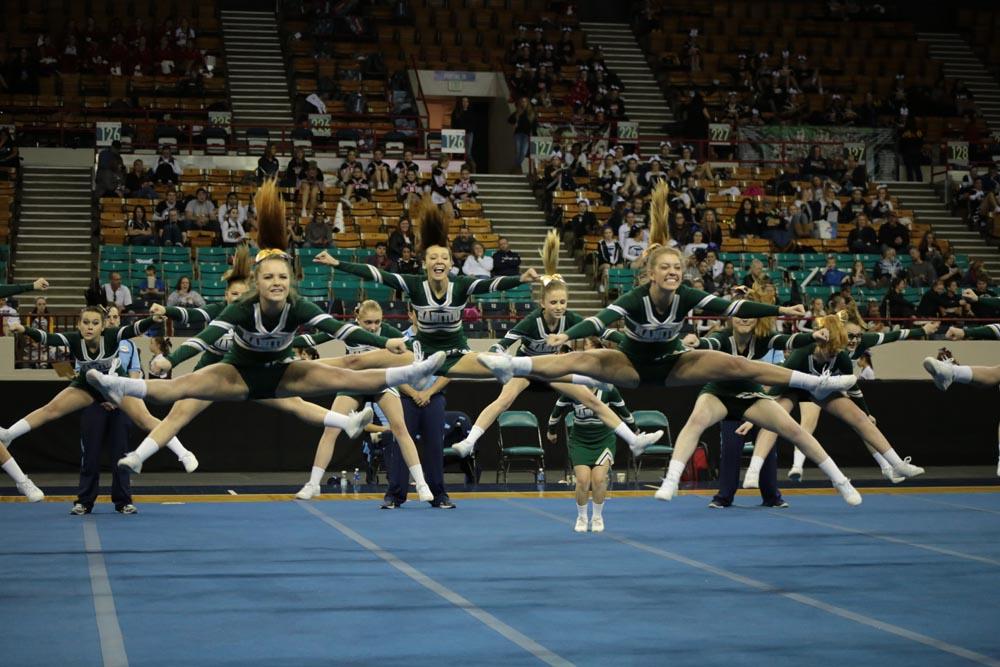 Ryan Murdock (12), Mahalia Henschel (12), and Kelsey Hartwig (12) lead the team in the completion of their jump sequence. All three girls have been on the cheer team since their freshman year. (Aubrey Hall)

Ryan Murdock (12), Mahalia Henschel (12), and Kelsey Hartwig (12) lead the team in the completion of their jump sequence. All three girls have been on the cheer team since their freshman year. 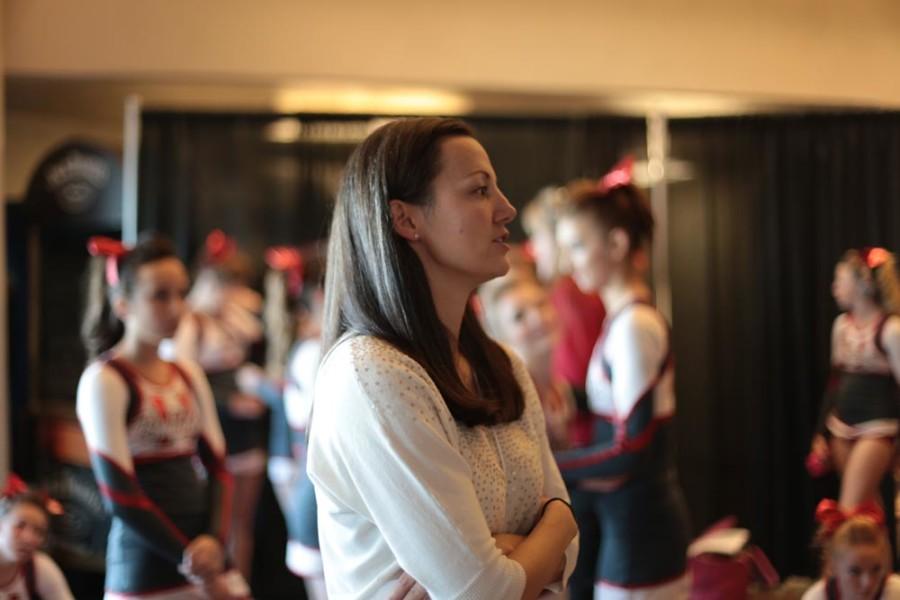 Gallery|14 Photos
Aubrey Hall
Temporary coach Alice Stoneback gives the cheerleaders directions as they practice their routine. Stoneback was the head coach of Manitou's cheer team for seven years out of the nine total years that she was a part of the coaching staff.

As Manitou’s cheer team took to the performance floor on Friday, December 11 at the Denver Coliseum, they carried with them the hard work of a long and arduous week. Along with the usual pressures leading up to the cheerleaders’ most important annual competition, there was the loss of their head coach, Katelyn McTamney, as well as loss of one of their routine’s main flyers due to injury.

Paige Mckenna (11), who was put into the routine as a relatively last-minute substitution for an injured flier, seemed unfazed by the changes. “I got put into the routine probably on Sunday,” said Mckenna, “So it’s been nerve-wracking, but I really like being able to learn from different people that I’ve really bonded with, and I just really like the sport. It was hard to learn, but I got the hang of it and I’m really happy about it.”

Alice Stoneback, who coached the cheer team for a total of nine years, stepped in as a coach for this year’s team as a replacement for their head coach after a last-minute staff change.

“It was very very stressful,” said Stoneback, “But it was also an honor that the parents and the athletes had that much respect for me, that they were able to trust me so quickly.”

After several hours of stretches, pep talks, and warm-ups, the cheerleaders took to the performance floor. At the beginning of the routine, there was a mistake with the audio, resulting in a few seconds of another team’s music being played. Undaunted by this, the cheerleaders completed their routine without dropping any stunts.

Upon the completion of the routine, many of Manitou’s cheerleaders walked off the mat in tears, eventually reconvening in the stadium to talk with their families and await the announcement of the finalists, who would compete against one another at 6:00 p.m. the following day. The team was expecting to be announced as finalists and continue with the competition. However, after an hour-long deliberation following an appeal filed by coach Alice Stoneback, the team’s rank dropped to 14.

“It’s a stunt that they [the cheerleaders] have been doing all year long,” said Stoneback, “It went through at least four tech judges, who had seen it and said that it was okay, that it was legal, but when we got on the performance floor, they finally decided that it was actually illegal, and gave us a 20-point deduction.”

After the finalists had been announced and it was clear that Manitou had not made the cut, it could be seen that though many of the cheerleaders made an attempt not to take the news to heart, it was a difficult announcement to bear.

“I think at first, we were all shocked,” said Carli Nanfito (11), “We didn’t want to believe that that’s how we were going out, especially the seniors. This being their senior year, they didn’t want to go out because of something that they really had no control over. If we had dropped a stunt or if we had done poorly, then they could say “Well, It’s on us,” but it wasn’t anything that we could control. We just did what we were taught, and we all just sobbed.”

The team has a recent tradition of choosing a single word to guide them through each year. Last year’s word was “Redemption,” which helped the team focused on winning the state title for their third time. This year, the team chose a word to help them through the constant obstacles they’d faced. Following the sudden change in coaching toward the end of the year, the team would conclude each practice by breaking with the word, “Grit”. Even without advancing into finals, the team was proud of how far they’d come and how many obstacles they’d dealt with.

After the competition, the team gathered at Red Robin, another long-held tradition. Sitting around the table, the cheerleaders continued to laugh and talk together. It was obvious that the team’s grit didn’t cease to exist when their names weren’t called for finals.