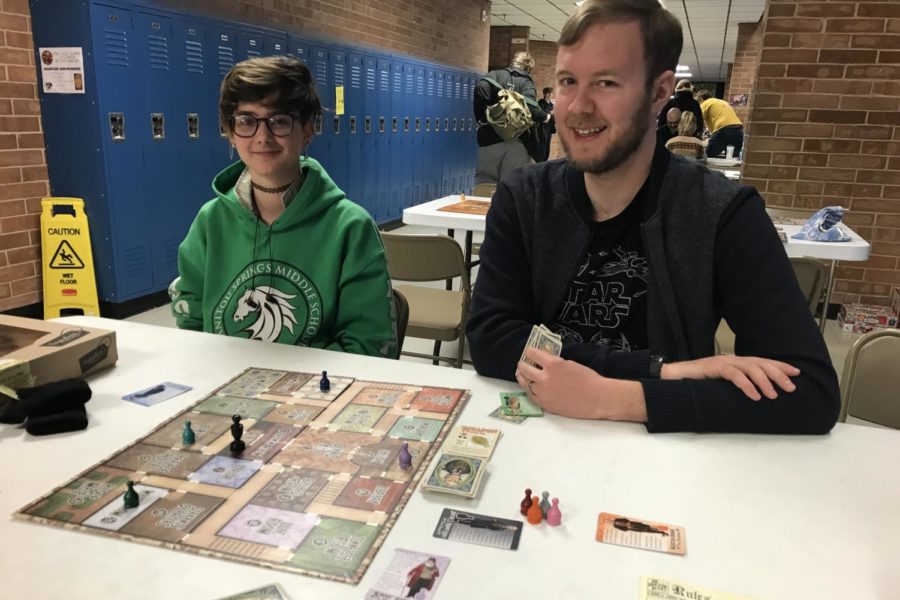 At the beginning of May 2022, science teacher Zach Brown put in his resignation from Manitou Springs High School to accept a new teaching opportunity at Liberty High School (LHS) in Academy School District 20.

Brown had many reasons for accepting the job at LHS, but his main reason was for his children to get the education that he and his wife had been planning.

“We’ve been talking for a couple of years now about where we want the kids to go to school,” Brown said. “Caitlin is 3 years old, so she’s at the point where we could send her to preschool; and kindergarten is on the horizon.”

It was a pain when I was a student to drive across town to hang out with friends who lived 20-30 minutes away. Sending my daughters to a school closer to home will hopefully be a boon to them socially.”

As much as Brown loves Manitou, he and his wife wanted their kids’ education to be started off in a place they feel has the best early education and that is closer to where they live for social reasons.

“I have more confidence in D20’s early education than I do other schools in the area,” Brown said. “And, non-academically speaking, it was a pain when I was a student to drive across town to hang out with friends who lived 20-30 minutes away. Sending my daughters to a school closer to home will hopefully be a boon to them socially.”

Brown has many feelings about leaving Manitou and the community he has been a part of since he was in high school.

Brown graduated from MSHS in 2010, so he understands the small school community; however, LHS is a 5A school and much different from what he is used to.

“Obviously, I don’t work there ye; but it is going be a very big school,” Brown said.  “I’m walking into a science department that has 12 teachers instead of four. That’s going to be very interesting as well.”

Brown has many different feelings when talking about his new job because of how different the atmosphere is going to be.

“Taking a job at a new school in a new district is a bit like visiting a foreign country for the first time,” he said. “I know a little about D20, but I am currently unfamiliar with the atmosphere, policies, procedures, culture, etc., but I’m excited to find out what it’s like.”

Mr. Brown encourages me to be the best teacher I can be, and he’s been supporting me since I came to Manitou as a brand new teacher.”

While Brown’s colleagues are happy for him and his new job, the science department will be losing an important asset. Science teacher Julia Jackson will miss Brown as part of the department because he helped her when she accepted her job at MSHS.

“Mr. Brown encourages me to be the best teacher I can be, and he’s been supporting me since I came to Manitou as a brand new teacher,” Jackson said. “He’s also just become a great friend to me in the years we’ve worked together. There are too many reasons to count for why I’ll miss him.”

Brown was also a very important asset to the physical science classes according to Jackson.

Brown’s class was honestly a highlight of my freshman year. We had a lot of fun and it was just a weird and funny class.”

“I call him the ‘Physical Science Guru,’” she said. “He’s been a great help to me since I took up teaching a section of that class a few years ago.”

It’s not just colleagues that will miss Brown, but many students are also upset with the news of his resignation. One of these students is freshman Chloe Cuddihy.

“I’m going to miss having fun at lunch and just being in his class in general,” she said. “It’s going to be really sad not having him around the school. I think I speak for a lot of people when I say he is going to be very missed by us all.”

Freshman Shaena Vigil, will also miss Brown, especially being in his class. “Brown’s class was honestly a highlight of my freshman year,” Vigil said. “We had a lot of fun and it was just a weird and funny class. I will miss the weird sense of humor we had with our class and all of our interesting characters that we would make for equations.”

Brown has some final words for the students of MSHS: “Don’t shoot for greatness, shoot for happiness,” Brown said. “Good luck and I’m gonna miss you guys.”