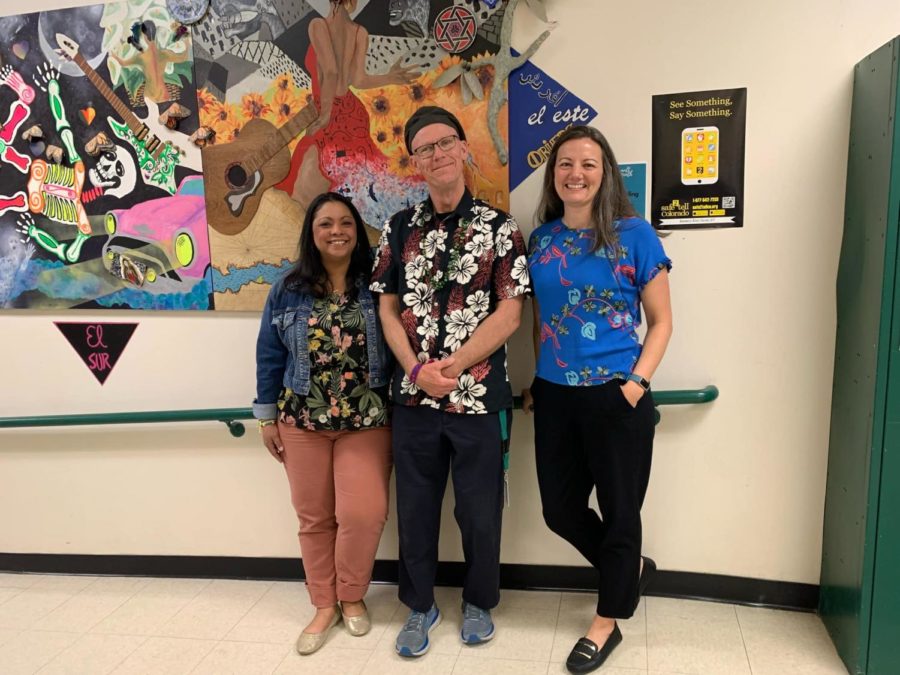 The World Language department at MSHS consists of Ingrid Perez (Spanish), Terrence Batson (Spanish and German) and Alice Stoneback (French). Both Batson and Stoneback will be moving on next year.

Terrence Batson, a Spanish and German teacher of nine years, resigned from Manitou Springs High School in order to pursue his love of working with children. He will move up the pass to Ute Pass Elementary School next school year.

Batson first contemplated this move in the early COVID-19 days during lockdown. “What happened in schools across the country during COVID-19 impacted me immensely,” Batson said. “My priorities and values have shifted as a result, and I began to reflect on where I might be more comfortable and have impact next year, the year after and for the rest of my career.”

Any success I experience is contingent upon building positive, authentic, and trusting relationships.”

Batson’s next chapter of his career will be different from his previous job. He will be switching to elementary school, but he will still be in the Manitou Springs School District. “I will be a K-6 Spanish Teacher and Tech Integration Specialist at Ute Pass Elementary School here in MSSD, Go Mustangs!” Batson said. “I have taught primary Spanish before, and I loved it! Teachers during the pandemic learned a great deal about tech integration through remote and hybrid learning, and I have always utilized technology to teach.”

Batson thought this was a good fit for him as he cherishes the future of our country and a positive impact on the children of the district. “I really enjoy working with youth,” Batson said. “I like to think they keep me young in mind and spirit; but, the body, less so!

He is also invested in “whole child education”, a philosophy that MSSD14 elementary schools use. “I really love what this district has to offer students in the way of setting and approach: that is the whole child education,” Batson said. “When I heard about the posting at Ute Pass, I went for it. The days after I submitted my application, I increasingly felt it was the right move for me.”

We will miss everything from his not so funny jokes to his constant guidance and support.”

Batson has no regrets. “Naturally, I leave with mixed emotions,” he said. “While I am leaving a fantastic school that I have come to know and love, filled with incredible students and staff, and too many special memories to recount, I am also ecstatic about a new direction and environment I will be making at Ute Pass.”

Batson first came to MSHS in 2013.  Being a veteran of the school, he has watched a lot of growth and has always credited his and others’ success to the relationships and teamwork. “Any success I experience is contingent upon building positive, authentic, and trusting relationships,” Batson said.

Many of these relationships were developed outside of the classroom. During his time at MSHS, Batson sponsored many clubs and supported many students. “I have a ton of wonderful memories from BreadHeadz to Muffin Topz, Spanish Club to International German Exchanges, to working with Exchange Students, and helping to make World Language and Culture Night a Thing,” Batson said.

Due to the interpersonal relationships built through his position, he is hoping not to be gone entirely from MSHS. He hopes to continue to attend sports events and of course, he will continue to be a big part of World Language and Culture Night.

Upon hearing the news of Batson’s resignation, Ingrid Perez, a Spanish teacher at MSHS was torn between her excitement for him and her own reaction.

“Well, at first, I was not happy,” Perez said. “I was being a little bit selfish because he has been my mentor during this whole year, and I will still need his guidance next year. But, I know that he needed a change of scenery, so I’m delighted that he got that opportunity.”

I have never had a teacher that has shown so much care and compassion for each individual student and has wanted their students to strive and grow more than Mr. Batson.”

Batson left a lasting impression and impact on the World Language Department itself. “He has everything under control. He knows what to do, when to do it and how to do it,” Perez said. “We will miss everything from his not so funny jokes to his constant guidance and support.”

In her teacher appreciation speech for National Honor Society, Weatherly Hall (12) added to the themes previously established; not only does the department recognize and appreciate Batson’s leadership, but so do the students.

“Dear Profe,” Hall said. “You not only make the class effective and engaging but enjoyable for all of us. It is hard to learn a new language, which is no secret; but you genuinely care about your students and their learning. That shows in the progress each of us make with you.”

Batson was known for his impeccable teaching qualities and his drive to see each student succeed and grow. Hall said, “I have never had a teacher that has shown so much care and compassion for each individual student and has wanted their students to strive and grow more than Mr. Batson.”

Batson will be missed at MSHS next year, but he will still be in the district. On the flip side, the impact of MSHS on Batson’s life will never be forgotten and will forever be a part of him. “It has been an absolute privilege and honor to serve the students at MSHS for the past nine years!” Batson said. “I have had an amazing and unforgettable run at MSHS. Thank you to anyone who has ever been there for me, mentored, supported me, or been a friend.”