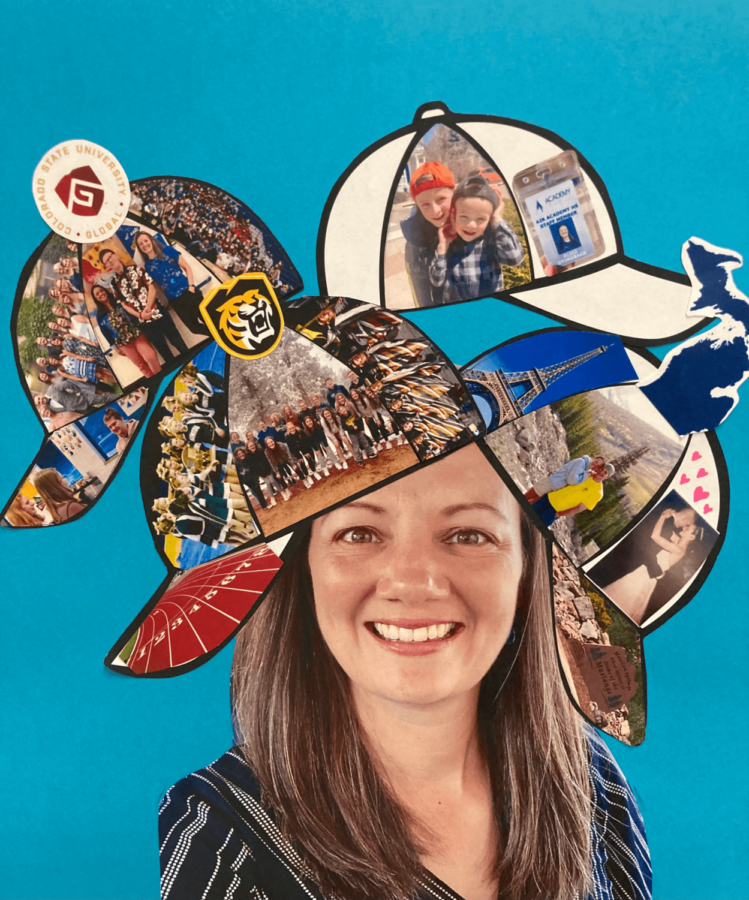 In her time at MSHS, Alice Stoneback has worn many hats, as depicted here from World Language and Culture Night 2022.

Alice Stoneback, French teacher and Student Council (StuCo) advisor at Manitou Springs High School, is resigning from MSHS at the end of the 2021-2022 school year to continue to take the next step in her career as the Dean of Students at Air Academy High School. Stoneback, more commonly known as Stoney by students and staff, decided to make this change because she believes becoming an administrator is the best option for her career.

Stoney went back to school to get her Principal’s License at Colorado State University – Global Campus and graduated in December 2021. Once she got her license, she began looking for administrative positions and that’s when she found Air Academy High School.

Stoney has been working in the Manitou Springs School District for 18 years. “My husband messaged me one day and told me to start looking for teaching jobs in Colorado even though we lived in Michigan at the time; and when I looked up French teachers in Colorado, Manitou was the first one to pop up,” Stoney said. “I called the school then got an interview over the phone for the next day. I was hired over the phone right after that interview.”

In Stoney’s time at MSHS, she has worn many hats. “I actually started out at Manitou as an English teacher, so I taught freshman English and French. Then I taught some middle school French classes, and then I started teaching Student Council as a class in 2011 or 2012,” Stoney said.

The halls of MSHS have her blood, sweat and tears deep within them; and no one will ever make more of an impact on this school and community than her ”

While Stoney has been a teacher at MSHS, she took on the role of a coach for many years as well. She coached the 2011, 2012 and 2014 State Champion Cheer teams. She also coached track and field for several years and even traveled to Woodland Park High School to be their color guard coach. Not only did she run StuCo, she also was the Key Club sponsor for a year and started a French Club in her early years at MSHS.

One of the biggest impacts Stoney has made on MSHS is by being the Student Council Advisor. “I became the StuCo advisor in my second year of teaching,” Stoney said. “A teacher that was hired at the same time as me, also from Michigan, Bill Dallas, and I decided to take on student council together.”

Stoney is not only the StuCo advisor for MSHS, but she is also the Student Leadership Committee Chair for Colorado High School Activities Association (CHSAA). This means she helps committees with representatives from around the state understand what each other are doing and helps them in situations that may need it. Stoney plans to try and continue in this position even though she will no longer be a StuCo advisor next year.

While being the StuCo advisor has helped Stoney teach others about leadership, she also learned a lot about it in the process. “I have learned more from being a student council advisor than I think I have from any class I have ever taken,” Stoney said. “I learned what it meant to do things from a servant’s perspective and seeing leadership as service. It is truly a way to serve the people that you’re around everyday.”

There are over 1.3 million words in the English language, and I cannot put together enough or the right combination of them to properly convey just how important she is not only in my own life but for the school.”

Not only has Stoney made an impact on the school as the StuCo advisor, but she has made a significant impact on her coworkers over the past 18 years.

“The halls of MSHS have her blood, sweat and tears deep within them; and no one will ever make more of an impact on this school and community than her,” said Angie Glass, Athletics/Activities Administrative Assistant. “She is gifted beyond measure with the way she spends her days with students. She is a true legend.”

Stoney has also had a major impact on many students’ lives and has taught many students what leadership really is. “There are over 1.3 million words in the English language, and I cannot put together enough or the right combination of them to properly convey just how important she is not only in my own life but for the school,” Gideon Aigner (12) said.

Stoney has been a person that staff and students look up to. “She pours her heart into everything she does,” Camden Seal (12) said. “It’s not her doing anything 50% or 70%; it’s always 110% with her, and she’s just a superhero.”

The StuCo advisor position is posted, but as of now there are no potential offers for this position. Although there are several new hires for the 2022-2023 school, so one of the new staff members could possibly take on this position.

Stoney will be starting her new position at Air Academy High School on August 3, 2022. While she is excited for this new change, she is sad to leave her students and to say goodbye to MSHS.

“I don’t want to have parting words, because that means this is goodbye, and I don’t like that,” Stoney said. “But I think if I could leave students with one idea, it would be to figure out who you are, what your strengths are and then learn how to shine and give back. And then you’ve met your purpose.”