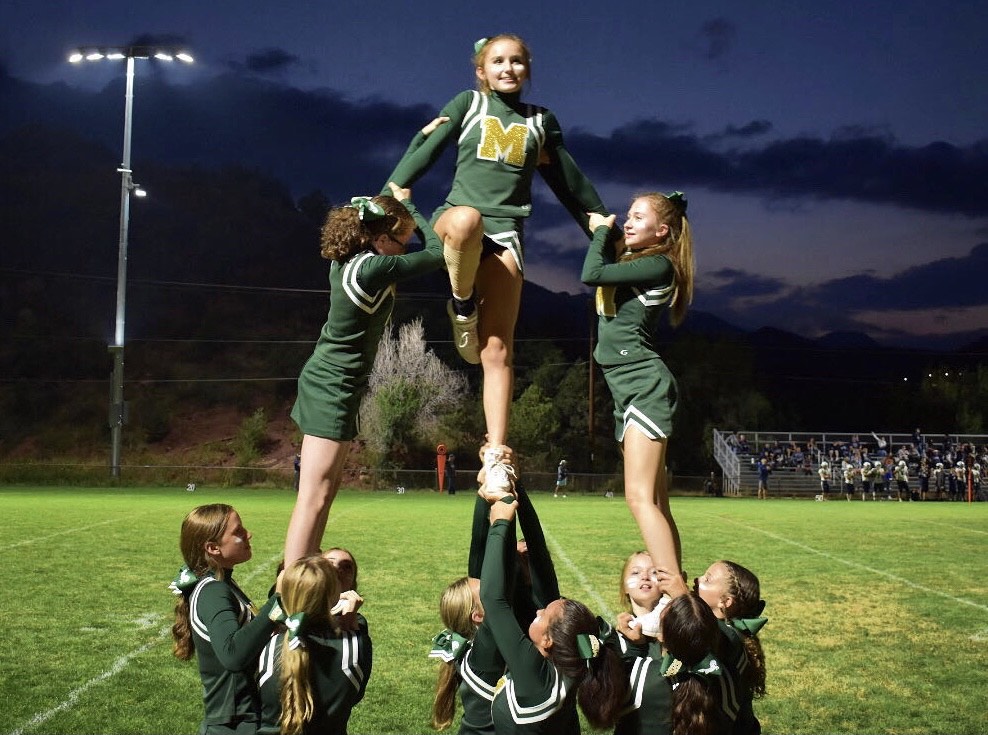 Quitting is the new normal and not just in cheerleading 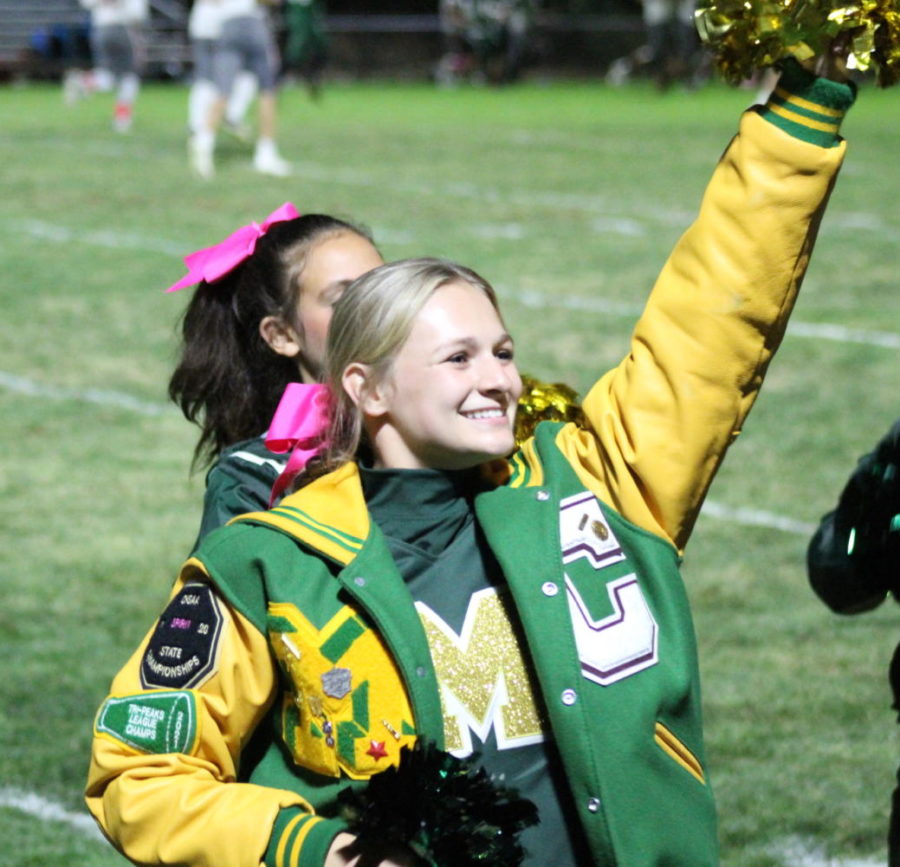 Cheerleaders at Manitou Springs High School take on one of the most time-consuming schedules: practices every morning, tumbling every Thursday night, football games, basketball games, and competitions. Each cheerleader has to have a strong physical and mental game to participate in this sport. Not everyone can handle the countless early mornings and late nights spent on cheer. It is here that we see why “MSHS cheer is down 10 members from last year”. This “quitting mentality” has become prominent in the team.

Cheerleaders and cheerleading are misrepresented constantly.

Do you even do anything at cheer practice? All they do is wave their pom-poms and dance around. Cheerleading is not a sport.

The stigma around cheerleading has spilled out from movie scenes and into the walls of high schools throughout the country, characterizing cheerleaders as egotistical, unathletic and dumb.

Do you even do anything at cheer practice?

Practice begins at 6:00 a.m. sharp. Roll out the mats and begin warm-ups. Sprints for every minute my teammates are late. Jumps first, then stunting. Arm, ab, and leg workouts end the practice. Throwing girls into the air before the sun has come up takes a decent amount of commitment. A 50 cent coffee from the cafeteria’s breakfast line usually gets me through the day.

All they do is wave their pom-poms and dance around.

As a school spirit leader, I must jump until my feet are sore and hold a smile for the duration of each football game. My team practices countless mornings in hopes of getting even just a glance from the student section. Our failures and falls elicit a stronger response than a perfectly executed stunt.

Cheerleading is not a sport.

This statement is arguably the most impactful on the stigma of cheerleading. Not only do I hear this in my small-town high school, but social media posts broadcast throughout the United States. It is defeating listening to the football players make jokes about our role in the school, unaware of the time and effort my team puts forth.

It is so easy to stop waking up for practice and so hard to overcome the challenges and push yourself to work harder. It is easy to blame everything and everyone and hard to admit to yourself that the work was too much.

Quitting has become normalized in our small cheer team but also in other sports, clubs and even the classrooms here at Manitou Springs High School. The 2020 school year ended in uncertainty. There is not a single student in the United States that did not experience the impacts of COVID-19.

No one has forgotten the hardships we went through, doing our homework as we watched our teachers and peers through a screen. Entering into our current school year, we see the changes that have taken place. There are no cohorts, everyone is in the building together, and we have had semi-normal events like assemblies and homecoming dances.

Despite the transition back to normalcy, the “quitting mentality” has remained. There have been numerous athletes here at Manitou who have decided that their sport was “too much”, including volleyball and boys’ and girls’ basketball. There have been students who have decided that their clubs take more than just showing up to meetings, and therefore quit.

Most importantly, however, there has been a number (way too high) of students failing classes, simply because they have quit. They cannot find the motivation to turn in a single assignment, and have decided that quitting is acceptable as it was in quarantine many months ago.

It has become the norm to decide not to do an assignment or not study for a test simply because students don’t want to. Teachers noticed the lack of motivation, especially in the younger classes as they entered high school during the pandemic. Knowing that high schoolers have no desire to put in the work for a class or a sport, what does this mean for our future generations moving forward?

Is cheerleading a healthy sport? 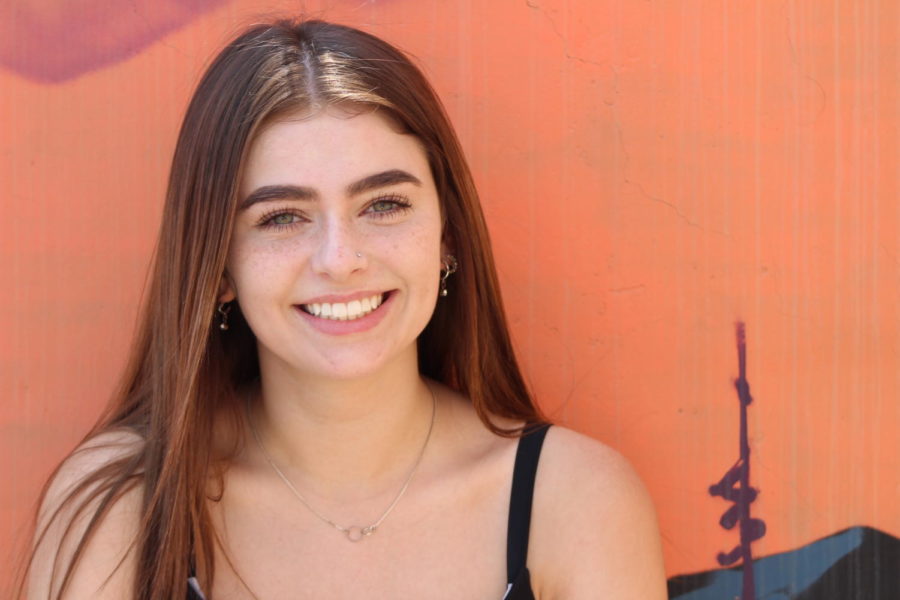 Piper Larsen is a reporter for The Prospector. This is her first year on staff.

The count of cheerleaders who quit the MSHS Cheer team is up to twelve, 2 more cheerleaders quit the team since the original report of 10 in the October 27 article “MSHS cheer is down 10 members from last year”.  The question remains why?

Risk of injury and being overworked and stressed are two of the main reasons for quitting the team.

Cheer is a great sport to be in, because of how much positivity and motivation comes with it. When starting on the team a person isn’t just joining cheer but better yet, joining the whole school, the entire Manitou community, and every other sport involved in this high school. Cheerleaders put in the time to learn about other sports around the school to understand the way the game works in order to support them.

Cheerleaders deserve more credit for how much they do for the school. The team is forced to practice in the morning, and many people would say that is because cheer is less important than other sports. However, cheerleaders work equivalently as hard as other types of sports do.

There are many cheerleaders that get injured throughout the season and that just proves how hard they work. They put their pain aside so that they can continue supporting other teams. When people degrade cheerleaders, it is extremely disappointing, because those people don’t understand half of what these cheerleaders go through in order to represent Manitou, and endeavor in all the cheer competitions.

Injuries are highly common on the MSHS cheer team. Throughout the season, at least one to two people on the team withstand some variety of injuries. Cheer is a full on teamworking sport; if someone is doing the slightest movement wrong, it’s possible for anyone in that stunt group to get injured. Therefore if anyone in the stunt group is injured already, they are most likely to struggle with keeping the stunt strong, which in the end can cause someone else to get injured.

“I hurt my ankle during another sport, but [the coaches] continued to ask me if I could stunt, even though it was obvious I couldn’t,” said one of the current cheerleaders.

Previous cheerleader Caylani Falbo (12) said, “I hurt my back in a car accident last year, and I still had to stunt and do cradles no matter how much pain I was in.”

Rick of injury isn’t the only reason that cheerleaders are quitting.  Being a cheerleader is time consuming and stressful. According to a current MSHS cheerleader, “It is really hard to be a part of anything other than cheer because of how much dedication they require.”

Cheer for most people is genuinely more fun than school, thus making it more important to many girls. Multiple cheerleaders said that they didn’t mind spending a lot of time cheering up until they had something they needed to get done but didn’t have any time to do so. This being because they had been dedicating so much time to cheer, that it was expected of them to continue with their dedication.

Where does all of the extra stress and pressure come from? It is not the coaches’ fault by any means. It may, however, be the way that they had been trained to coach. The coaches, (Nicole Lovato and Amber Bergen) went to Coronado High School when they were cheerleaders, and they were pushed to hold a higher standard because they were on a 5A team, which meant they had more competitors as well as more teammates.

“They expect a level of perfection from their cheerleaders, like a double standard, superstar athlete. It is understandable why they have practice in the morning, but we have personal lives outside of cheer,” said former cheerleader, Mathew Harangozo (12).

The cheer coaches had to work harder to be successful during their high school years. Many people in the community would say that the coaches are both genuine, beautiful people who care about every individual cheerleader on the team. But the overwhelming theme throughout these opinions is that the coaches should ease up and appreciate the 3A cheerleaders for how hard they work, even if that means the participants don’t reach the same level of success that the coaches had when they were cheerleaders themselves.

The previous captain, Adele Goodwin said, “I didn’t appreciate watching my best friends go through so much distress. I feel like having a leadership role means respecting and advocating for your team, and many girls and myself weren’t receiving that same kind of respect from the coaches anymore.”

It is hard to commit to anything that needs a full time commitment. Some individuals have dedication as a dominant strength but many others struggle to keep up with it. With the right support system and a large amount of respect, anyone can be a part of the team. However, if people feel as if they are being controlled or taken advantage of it is hard to gather that same respect as those who don’t mind being overly occupied.

The question remains.  Is cheer is a healthy sport? On a social level cheer is extraordinarily important to bring confidence to people who join the team, however from an academic and physical perspective, cheer is tiring and damaging.