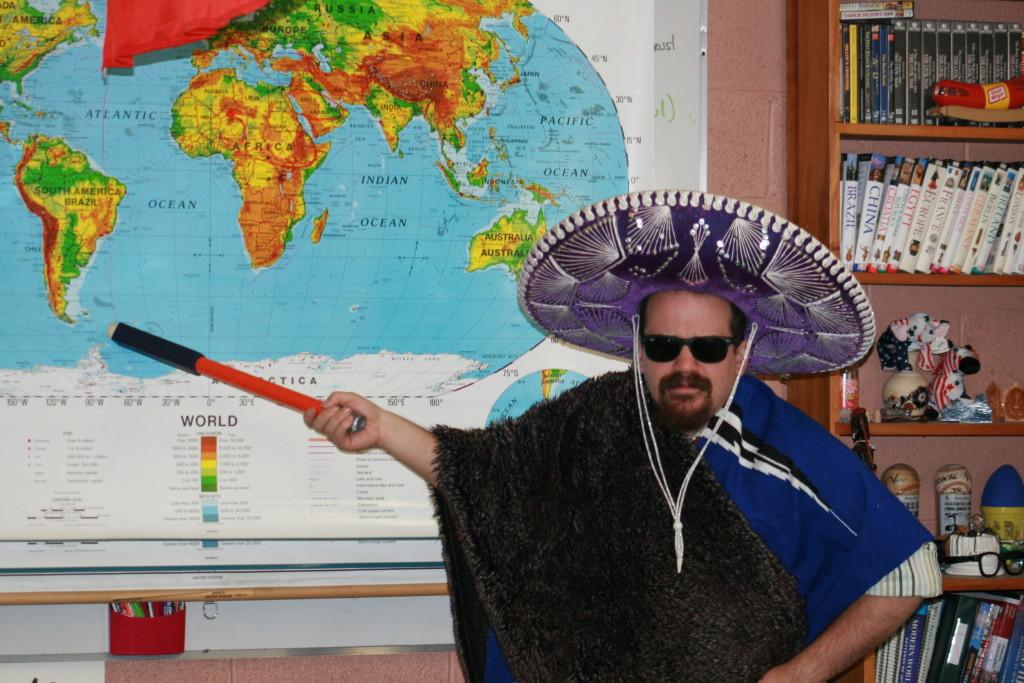 Timothy Hilt indicating where he will spend the next 40 or so years of his life. Photo by Keegan Bockhorst

Following a severe mental breakdown, teacher, philosopher and Las Vegas magician Timothy Hilt is set to vacate his coveted teaching position at the end of the year to protect Chilean gazelles called guanacos from cougars and poachers in Patagonia.

The seemingly spontaneous decision came after the impending Yearbook deadline became too much for Hilt to handle, causing him to burn down his house after attempting to dispose of papers and various forms of garbage in the fireplace.

This final straw, the razing of his own house to the ground, resulted in Hilt informing administration of his decision to leave and fulfilling his lifelong dream of taking care of the many guanacos that roam the Patagonian countryside.

“It’s not that I don’t love Manitou; I just love things with antlers,” said Hilt.

The Patagonian National Park Service has already contracted Hilt to protect the guanacos from their most common predators, cougars and poachers, and has therefore equipped him with a shotgun, an orange sweater vest and a small hunting Chihuahua.

Hilt, however, has refused all of these, saying that he is confident his strong magical background and training at Hogwarts will be more than enough to contend with whatever the Patagonian wilderness will throw at him.

Hilt also outlined some healthier reasons for leaving, citing the effects on his weight and baldness.

“It’s going to be tough, keeping up with all these lovely creatures and keeping them safe. I’m hoping to work off some poundage down there in P-Town,” explained Hilt. “I also hear that alpaca spit is great for hair growth.”

Hilt will be leaving behind Poetry Slam, Boys’ Cross Country, assorted English classes, his remaining cat that survived after he burned his house down… oh, and his wife.

“I’m going to miss my Babycakes so much… and my wife.”