Editorial: The War on Modern Science 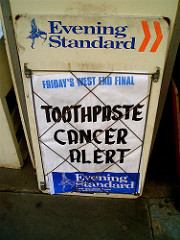 It’s the end of the year, and that means more and more surveys are bombarding students. Everyone wants to know what drugs you’re doing, what you thought about your English teacher, or what your tax bracket is.

All these questions are then funneled into scientific-looking test results that deliver crazy connections like “eating more chocolate makes your breath smell better” as one site declares.

Most people have the ability to decipher between the bait-click websites and the actual accredited publications, but as media becomes more and more aggressive in pushing out their content, integrity diminishes and people become more susceptible to false information.

Rarely do you see headlines like “New survey concludes that air is vital for human life”. People crave science that can be exchange with their friends as gossip; The more unbelievable the headline the more clicks it gets.

This reason drives so many surveys to become biased from the beginning. Scientists are pressured to reveal crazier information the last, otherwise another expert will deliver the results a publishing company wants.

How many times have you seen an asterisk in the headline of an article? The Smithsonian published a rare scientific article not because of the subject matter, but the fact that they realized the inconsistencies in the study right away.  “Being Super Busy May* Be Good For Your Brain” with the subtitle “*Does busyness boost cognition, or do people with better cognition tend to keep busy?”.

Although Brian Handwerk, the author of the article, may not have picked the best study to write about, he does still push the subject material on all audiences.

Despite the appearance of openness and honesty, the misleading featured photo of a 30 year old woman has no relation to the study done on 50-89 year olds. This proves the idea that even the Smithsonian, one of the most highly-regarded publications, still stretches the truth to keep their website views up.

Additionally the new “entertainment science genre” has no motive to be accurate and as a result, few to zero verification experiments are done. Because of this, scientists don’t make their experiments replicable, which is absolutely necessary if your results are to be trusted.

In conclusion, surveys can be distorted and changed in order to fulfill a certain agenda, and misleading headlines and articles can be a serious danger to the general public.

This is more than just a bunch of crazy surveys that no one reads or cares about, this has turned into a war on the integrity and honor of centuries of science.  Our culture of quick entertainment has turned the most objective and reliable fields into another industry, which sacrifices quality of the source material to obtain more views, shares and likes.