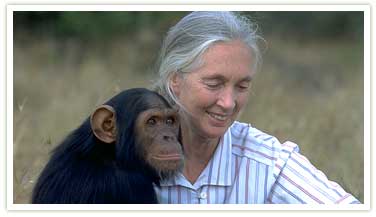 Jane Goodall bonding with a Chimpanzee in Africa

There have been many accounts that the elephants should not be used within the acts, due to the abuse. Videos have surfaced proving the abuse of whipping, hitting, and starving the animals. Laws have been passed in multiple countries banning the use of elephants as entertainment, and this caused problems for the circus to perform. One of the biggest problems that occurred was back in January, when a baby elephant named Mike died of a disease called Endotheliotropic Herpesvirus that has been linked to stress. Mike was’t the only elephant to die under the Ringling Brothers watch. An eight month old elephant’s legs were shattered during training, a 3-year-old drowned in a  pond trying to get away from a trainer who had a bull hook, an instrument used to make the elephants perform. But, the Elephants aren’t the only animals being used for entertainment.

Using animals for entertainment makes children happy, they don’t know what happens behind closed doors. In 1985, Jane Goodall visited the Cheyenne Mountain zoo and was displeased with how the chimpanzees were kept. She planned a project called ” chimpan-zoo” allowing the zoo keepers to understand how captivity can affect the chimps. This sparked an idea with Colorado college to start an anthropology course centered on the idea. Today, you can still take the course and see threats that apply to the animals. But this doesn’t fix the problem of the upset chimpanzees. When observing them in the zoo, they can be found with skin patches on their arms and legs, continuous rocking, and spitting. They travel for 60% of their day and cover as much as 10 kilometers of land. The average enclosure for a zoo animal is around the size of a class room contain no body of water, and the group is smaller than what a free living chimpanzee is used to.

When visiting any event that uses animals as entertainment, protesters are guaranteed to be outside. This occurs anywhere from the renaissance fair to Sea World. The Sea World Orcas are no longer going to be performing, no longer kept for breeding, or be in the small space which they have been kept in. The space caused them to become upset and violent with the other whales not to mention their noticeably bent fins. Their bent fins and aggressive behavior isn’t the only act they have committed out of frustration or depression. Sea Worlds most famous whale Tilikum, has been responsible for 2 deaths of trainers. The movie Black Fish was released three years ago to show that the whales obviously aren’t fit to be in captivity. To read the Prospectors editorial on the Orcas by Sarah Bougush please click HERE.

“It’s time to stop the shows, it’s time to stop forcing these animals to perform in basically a circus environment. They should release the animals that are young enough and healthy enough to be released. The animals like who are old and sick like Tilikum, and have put in 25 years in the industry to be released in an open ocean so they can live out their lives and experience the open ocean,” Samantha Berg, former Sea World trainer.

We take the smartest animals from the wild and take them from what they know. Infants of the animals may never know what it’s like to be in the wild due to being born in captivity. We abuse them to do tricks just to see tickets for a show. An animal life is worth more than a ticket into a circus, Sea World, or a zoo. We pressure them to appeal to the open public. The animals are smart enough to fight back when they feel they are in danger, so when we throw them into an enclosure they barely ft in someone will die out of the animal becoming frustrated and depressed. We need to realize how important an animal life is before any one else dies. These animals need to be free and be put back where they belong.