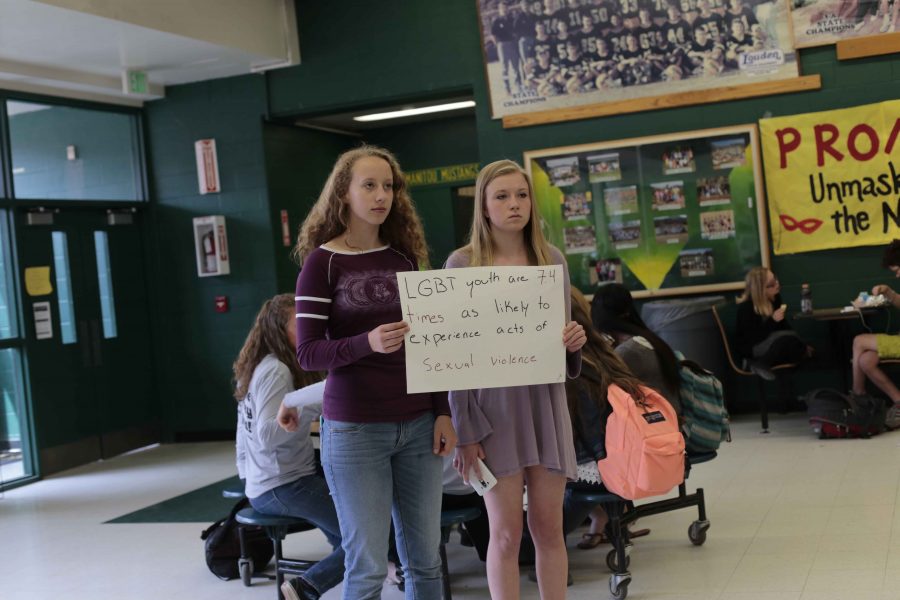 Lily Reavis (11) and Aubrey Hall (10) participated during the lunchtime protest to bring awareness to the struggles of LGBTQ+ community.

The Day of Silence, which stands to bring awareness to anti-LGBT harassment, began in 1996 and has since became an international event. The Manitou Gay Straight Trans* Alliance (GSTA) participated in the event this year, on April 15.

“We’re silent to stand in solidarity with people in the LGBTQ+ community  whose voices have been silenced as well as to mourn those individuals in our community who have been killed or committed suicide in the past year,” said Aubrey Hall (10), a member of the GSTA.

GSTA members wore purple in order to look unified as a group. Purple is also the color of  Transgender Day of Remembrance, which occurs annually on November 20.

Members of the GSTA stood in the commons during lunch, holding signs that read statistics about the suffering of members of the LGBTQ+ spectrum.

Wyatt Fries (12), the president of the GSTA, walked around to the tables to explain the reason behind staying silent, and to share statics about things that may be more relevant to the student body.

Autumn Lehner (10) held a sign that said, “They don’t have a voice to speak  anymore.” “It was meant to represent the dead members of the LGBT+ community and the fact that they no longer have a voice because they are dead. Specifically the ones who committed suicide, because they couldn’t stand the oppression,” they said.

“I wouldn’t say the day was successful, overall we did manage to get people’s attention but so far on social media and hearing from students many comments we are getting are saying ‘this is stupid’, ‘the f*gs were in the lunchroom’ and other negative comments about both our decision to participate and the statistics we held.  I would say we gained attention, but overall it did not help get us any more allies than other people who may find GSTA members,” said Fries.