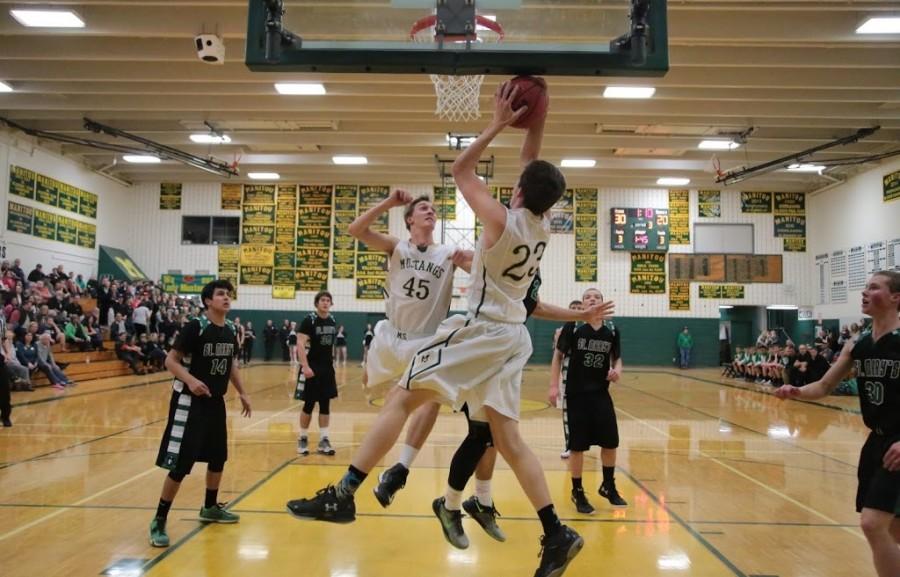 Lucas Rodholm (11) and Riley Manzo (12) rebound a shot in the third period.

Each team is coming off wins this weekend. Manitou beat Dolores Huerta and CSCS defeated Lamar.

If either team is to win, they will need to have big performances from their stars, Manitou’s forward Lucas Rodholm (11) and for CSCS’, center Samuel Howard. Of course the rest of the teams must also shine, and both of them have been playing extremely well as of late.

In the past 14 combined games the teams have played, none of them have been lost and they are a combined 30-5 on the season. As well as having a phenomenal record, each of the two powerhouses are ranked in the top five of 3A boys’ basketball.

All of these stats point to what should be a remarkable game tonight between two long time rivals in the Tri-Peaks area. The two schools girl’s basketball teams also face off, in a matchup that pits the 3A number two and 17-0 Manitou team against a 14-3 CSCS team who has proven a worthy opponent in the league.

Both teams are coming off victories against 3A top ten teams. Manitou beat St.Marys (another league opponent) 77-53 and CSCS took down Lamar 43-31.

Either game looks to be a good one, and both have potentially great effects on the look of the Tri-Peaks standings.