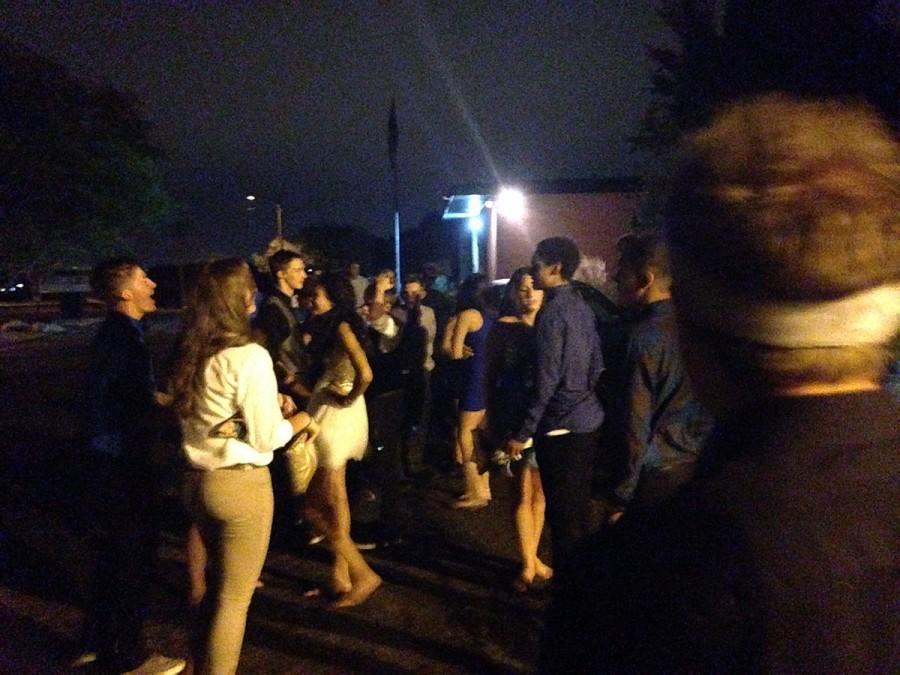 Evacuees stand outside of the school waiting for approval from the fire department to reenter the dance.

“It was just really, really hot.” Said junior Hannah Kimmet, who like many of the other Mustangs that attended the Homecoming dance, did not let the excessive heat and fire alarms stop her from having a good Homecoming experience. “It would have been nicer if it wouldn’t have been as hot,” stated Kimmet, “but I still had a great time.”

Kimmet says she saw a girl faint and felt obliged to help.

By the end of the dance another student had fainted according to Dean of Students Jesse Hull. Hull would not say why the students fainted.

The combination of the enclosed environment, the fog machines, and the dancing all were recipe for an uncomfortable temperature.

The temperature was more than just uncomfortable for the students participating. Fire alarms repeatedly sounded off, causing a stir of panic on the first occasion.

Senior Nik Lyles described a large crowd of students who charged at the exit doors when the alarms went off.

“Many kids were cussing, and shoving each other, and shouting at the chaperones in attempt to exit through the doors that were the quickest route outside,” said Lyles.

Mrs. Geraci, a chaperone at the dance, tried restraining the crowd from exiting through the northern exit doors.

The school morale proved to be at an exceptional level. Students did not let their homecoming dance get ruined by the faulty fire alarms. There is a crew of fire technicians constantly checking and maintaining the school fire alarms from the local fire department.

The dance, which like every year was organized and made possible by student council, was a successful event in which students were able to celebrate their school spirit and make everlasting memories, regardless of the hindering factors.