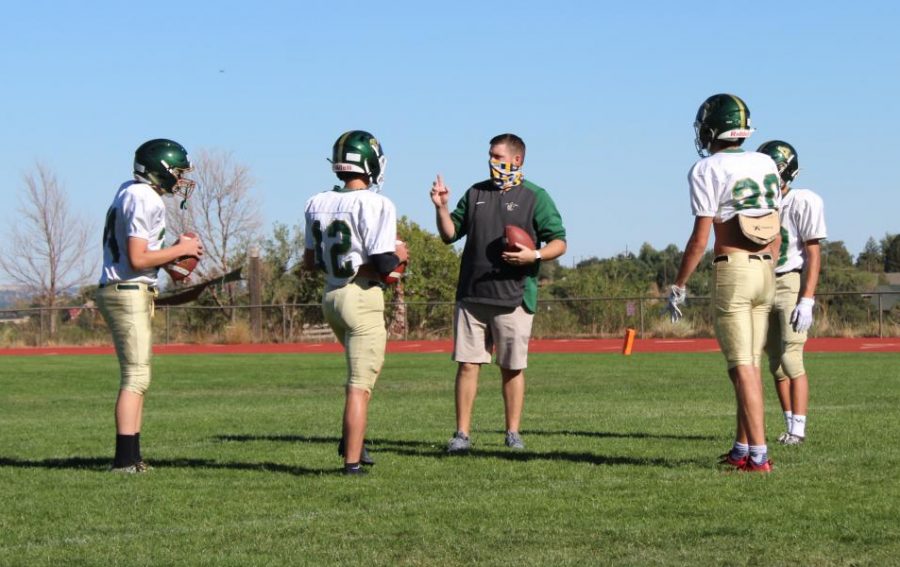 Over the last several weeks Manitou Springs High School had to push its football program back to the spring; but now that CHSSA changed its stance, the season opener is approaching. MSHS students and staff are very excited for this upcoming season to start. Over the last month, many players were very saddened at the news of a pushed and shortened season, but now many of those players are ready to get back into the action. Before the news of the season beginning in October, the Mustangs were anxious to get on the field. Several were preparing daily and working out to get into top shape. Ethan Boren, one of these star football players, was positively affected by the news. Before the season was announced, Ethan was facing a hard time. “Football is my true passion,” he said. Boren is very involved in sports, but he  primarily aligns himself with the football program. “Football is my favorite,” he said.  The football team wasn’t the only group affected by the delayed season.  Gideon Aigner, an incredibly passionate student at Manitou, has always loved going to school events.  The news of the season starting late was tough for Gideon. “Covid sucks,” he said.  filled with Green and Gold spirit, he missed going to sporting events; but with the news of the season starting, he is thrilled. Football practice started September 24th and the first game is Saturday October 10th at 1 p.m. against Moffat County at home. “In practice we heavily focused on our Pistol Power offensive scheme that we plan on using against our competitors” Coach Jeck explained. “This scheme heavily focuses on a rushing style of attack.”  Coach Jeck is excited to get back on the field. “I love coaching and seeing teamwork develop,” he said.  Mustang fans will be able to watch home games, but the stands will look different.  “We do know that there will be a limited number of available spots for fans to go [to games], and tickets will be on sale [online], Jeck explained.  While Mr. Jeck doesn’t exactly know when those will be for sale online, he expects an email to be sent out. So for Mustang fans, especially Gideon, there is a chance to go to the games based on logistics. The team feels very good about the season and their health. “No one has expressed any concerns regarding Covid on the team and we are ready to play to full extent,” said Coach Jeck. He also believes that MSHS has taken many precautions in dealing with the virus and feels very confident that the school has done everything in the best interest of the players to social distance and wear a masks when needed. As for everyone else, the excitement for starting the season is very strong and the school spirit is strong.  During this period of pandemic crisis, bad news has become normal; but the news of football season beginning earlier than expected has lifted the spirits of all who call themselves Mustangs.