MSHS Wrestlers Learn From the Supportive Atmosphere of the State Tournament 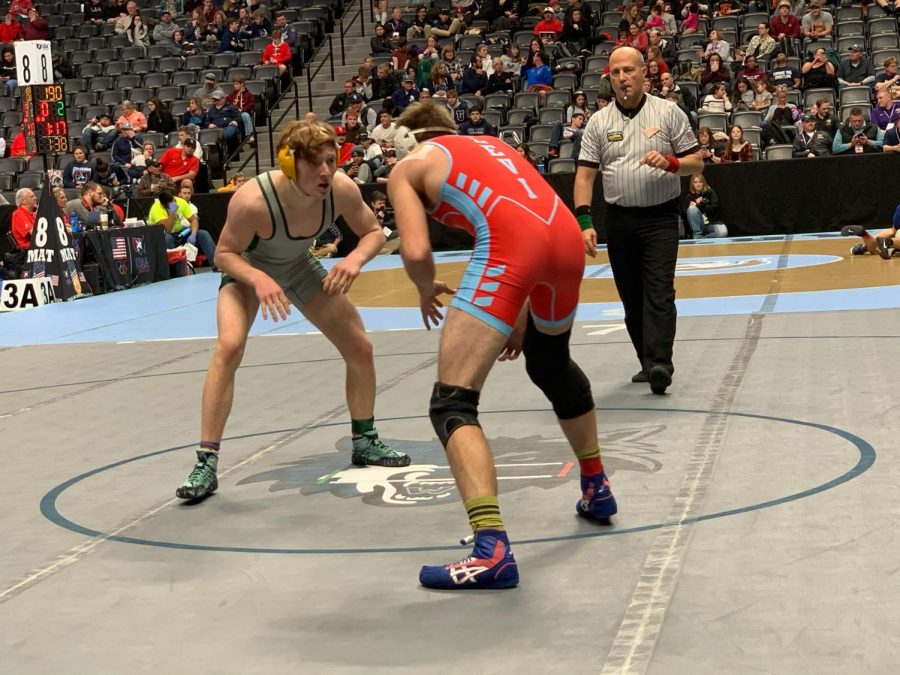 Emmett Wolfe (11) prepares to shoot on his opponent.

This year’s Wrestling  State was a whole different beast compared to past State Tournaments. While the outcome of the matches may have been cut and dry, for many, the State Tournament reflected moments and lessons learned both on and off the mat throughout the season.

Chloe Donegan (11), who’s State Tournament was a couple of weeks before the boys’ said, “I’ve always seen wrestling as a vulnerable sport. You see your teammates bleed, cry, get hurt and lose a match they should have won and that builds a brotherhood… you know what they’re going through, and through that vulnerability, you bond.” That’s certainly been true for this year’s team.

Four wrestlers’ hard work and dedication to the sport paid off, resulting in them wrestling at State: Wesley Reeves (9), Terry Lindh (10), Emmett Wolfe (11) and Hunter Gilpin (12). Unfortunately, none of Manitou’s state qualifiers placed at the tournament. “I don’t think that was from lack of wrestling, it was from an increase in competition,” said Orion Lavigne (12).

This year’s brackets were terribly competitive, which, despite the aspirations and hard work of the wrestlers, ultimately defeated their efforts to gain podium. “It’s definitely different than all the other tournaments we go to, it’s big. There are hundreds of people watching… it’s a really big event and some of the top wrestlers are going to compete.” said Lavigne. Coach Paul Bonner has learned never to predict the outcome of such bigger tournaments or encourage overconfidence by assuming success repeated what he’s been telling the team since the beginning of the season. “The State Tournament is tough. It’s pretty unforgiving. It’s anyone’s game,” said Bonner.

During the tournament, tensions were high. Despite this, all four wrestlers kept a positive attitude and productive mentality throughout the course of the event. “We had a lot of kids going out there knowing that they could have the potential to place and I feel like our group mentality was, ‘Don’t give up, be a bracket breaker’,” said Lavigne, “It was wrestle hard, wrestle all three periods, anything can happen.”

For the wrestlers who were pretty new to the whole State experience, it was a big step, which definitely caused some nervousness. “When I got out on my first match and I lost, I was pretty upset because [my opponent] made me feel weak, and generally I don’t feel very weak but wrestling another dude that you’ve never seen before, that’s bigger than you, it’s a little scary,” said Lindh, “And when he beats you, it’s a little nerve-wracking. It makes you feel upset.”

Many students may wonder who this state qualifier is. Though Lindh just moved to Manitou Springs, Colo. from North Carolina, he’s not exactly new to the wrestling program at Manitou. Before he moved to North Carolina, Lindh wrestled for Woodland Park and Manitou in middle school. He moved back halfway through his sophomore year (this year) and is excited to wrestle again for Manitou. Since Lindh was only verified by his previous school in time to wrestle leagues, many students at Manitou were unfamiliar with his successful wrestling record. After placing at leagues, which qualified him for State, Lindh’s future in the program looks promising. “Whenever I’m about to wrestle I can never escape the feeling of nervousness in my stomach, but I always try to get into a confident mindset before I wrestle,” said Lindh, “Having my match on the live stream made me feel pretty good because my friends got to see me.”

This was the last State Tournament for senior Gilpin. While things may not have turned out exactly as he had hoped, he still had a good year, and was happy to have had the opportunity to leave an impact on the wrestling culture at Manitou. “This was my last year wrestling at the State Tournament and knowing that we have a freshman, a sophomore and a junior going [to state] with me as well, made me want to show them what State is all about,” Gilpin said, “I definitely took some different chances that a lot of people did not expect from me. Knowing that I had Orion, Grayer [Whipkey (10)] and a couple of other people there who were cheering me on, knowing that a bunch of other people who were in my corner throughout the year were there at State watching me excited me and helped me out.”

Coach Bonner also had similar feelings about the camaraderie of the team, which he believes is a huge factor in building each wrestler to be the best they can be. “I talked to the three guys coming back [for wrestling next year] and I asked them ‘Where are you gonna be next year, a year from now?’ and all three of them pointed. They wanted to be down on the [mat]. That bodes well. [They have] good attitudes, they’re disappointed that they didn’t do better, but they’re hungry for more,” Bonner said, “For me, that’s all I ever wanted: for a bunch of kids to come together, make a team, have a good experience and make themselves better individuals at the end of the day.”

The wrestlers have certainly formed special bonds, which have encouraged them to push each other to higher levels of commitment. This environment is so much of what makes the Manitou wrestling team so successful. The constructive and supportive atmosphere helps wrestlers develop and grow. This year, one relationship that stood out more than the others was that of Whipkey and Gilpin. “The heavyweight and the one-thirteen talking together and learning moves off of each other… Grayer really inspired me to push myself this year as I pushed him. It may not look we have a good relationship on the outside but on the inside, once we hit the mat, me and him are like brothers,” said Gilpin.

While the wrestlers may not have seen exactly the result they were hoping for this year at State, it’s comforting to know that for many of them, the relationships they’ve created and the bonds that they’ve formed will continue to positively affect them as they continue through the program or on to college. “I’ve been here four years and a lot of people can still come up to the State wrestling. It just proves that us, Manitou, we have a big team and it’s like a family to us,” Gilpin said.