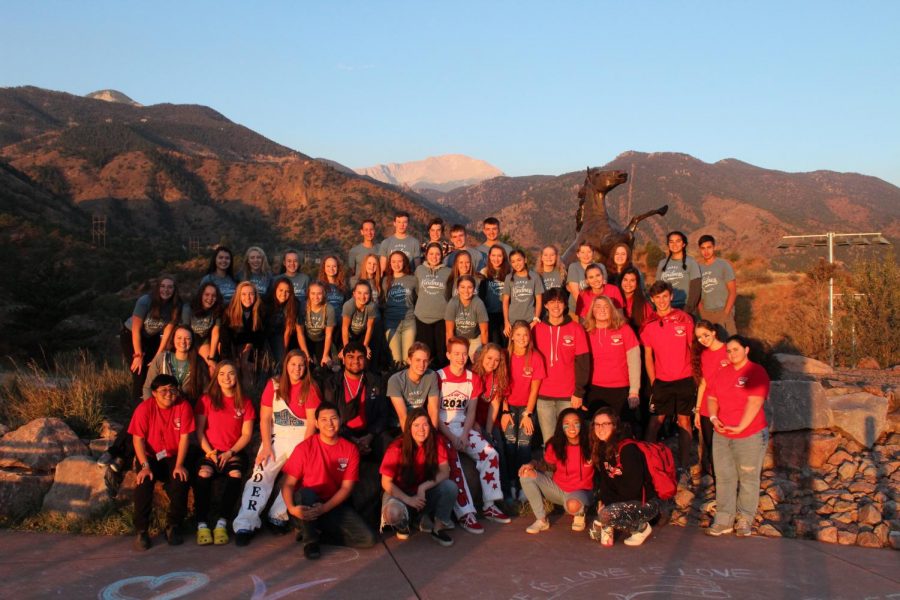 490 students, 100 advisors, 69 schools, one conference to bring Student Council groups from across the state together. The Fall Conference (FallCo), hosted by the Manitou Springs High School (MSHS) Student Council (StuCo), was a huge success. FallCo’s theme for the 2019 conference was “The 14,000 ft View, Your WHY is Worth the Climb” and included workshops, leadership building activities, guest speakers, assemblies, and celebrations.

MSHS’s student council has been hard at work for the past two years planning for this big event. It all started with an application at the beginning of the 2017-2018 school year. And then a response came, Manitou would be the first small school to host a FallCo. Last year, StuCo began planning the basic logistics for the conference and they were constantly working to pull together the two-day event. Seniors Coco Stevens and Melissa MacDonald were chairs of the FallCo committee and by working with Mrs. Stoneback, they were able to find guest speakers, build rosters for groups, putting together instructions for workshops, and helped to put together training for leadership workshops. On Aug. 5, 2019, the MSHS student council worked with CHSAA student state representatives to build and run through the FallCo curriculum. The prep work that took nearly two years paid off and MSHS StuCo was able to put together “the best FallCo” that some of the council members have ever been to.

Planning the event took “a lot of moving pieces that we had to fit together,” said Stevens, “pretty much anything you changed would affect the whole thing in some way.” Everyone had to work together to plan FallCo down to the smallest of details so that the day-of, everything would run smoothly. For MacDonald, the biggest roadblock in planning for the conference was “the number of hours in the day for us to get things done.”

To kick-off the activities of FallCo following check-in, Student Councils from across the state filled the bleachers of the new gym and were welcomed by MSHS StuCo and the cheer team. Music blasted, pyrotechnics sparked, and the crowd was full of energy for the guest speaker to follow. The MSHS StuCo chose the co-founder of Character Strong, Houston Kraft, to be the Keynote Speaker for this year’s conference. Kraft spoke about the differences between being nice and being kind: nice is convenient but kindness takes lots of work. He stressed the importance of showing compassion for others and to breakdown the barriers that prevent kindness – incompetence, inconvenience and insecurity. “Kindness actually takes work and I haven’t ever thought about that,” said Aiden Coté (10) “his story about the old lady on the airplane that nobody paid attention to made me cry.”

Kraft led the students through exercises to connect everyone in the room and have them look at kindness in a different way. Each student had to nonverbally express one of four emotions – sad, mad, glad or afraid – and find a partner who was expressing the same emotion. Together, they learned how to give meaningful compliments to each other, talk about their emotions and what was stressful for them, and they formed bonds that connected all the students in a really special way. “Normally I don’t do great with big groups of people,” said Reavis, “but I got the best vibe from everyone I was around. Every single person I met was super kind and sweet.”

Assisting MSHS StuCo with the planning and execution of FallCo was CHSAA state representatives, students from all over the state who went through an application process to get the leadership role. Manitou’s own Caden Salladay (11) applied his sophomore year and was chosen by the CHSAA Student Leadership Committee. It was Salladay’s job to coordinate 20 other state representatives during the conference. “The trust people put in me was the toughest part and meeting their expectations was a lot of responsibility,” said Salladay about his coordination job, “But I couldn’t ask for anything else. Being a state rep. was amazing.”

During both of the days at FallCo, MSHS StuCo members and the state representatives led groups of students through a total of six “Family Group” sessions, all named after notable 14,000-foot mountains in Colorado. The leadership skills-oriented curriculum was developed over the summer when Council members and state representatives met at the StuCo retreat, where they could work out the kinks and practice the lessons. In the sessions, students talked about how they related to and applied the theme “Your WHY is Worth the Climb.” The Family Groups were very meaningful to many of the StuCo members. Elena Reavis (10) said, “I don’t think I’ll lose touch with anyone in my family group, even the seniors. We all share a little part of us that is similar and we’re all connected in a special way.” MSHS council members are still in touch with the state representatives they were paired with at FallCo through social media.

On top of students going to Family Group sessions, they also went to workshops throughout day one of FallCo. There were a total of 28 workshops taught by a mix of students, teachers and advisors; students taught 17 of those workshops. Two of Manitou’s own StuCo members taught workshops, Ben Schwartz (12) and Salladay. Schwartz’s workshop was titled “The Importance of Body Language” and had participants look at how body posture is important in everyday life and the psychological aspect of body language.

Salladay taught a workshop and his favorite part was “teaching about something that was meaningful and impactful. One kid came up to me after crying and said it was empowering. Teaching a workshop was menacing to think about but, truly, I wouldn’t change it for anything.” Salladay’s workshop, “A Story of Humanity and Shared Meaning”, focused on a Swahili mindset called ubuntu which directly translates to “I am because we are.” Senior Taylor Foky attended his workshop and said, “I feel like it really captured what we want for our council. He made his workshop very personal, especially because he mentioned the [Westboro] protest on [October] fourteenth. It was a moment I was super thankful for.”

After workshops concluded, attendees flooded the big gym for a ThinkFast Interactive assembly focusing on Drive Smart, presented by the Colorado Department of Transportation. ThinkFast Interactive has trivia competitions as a form of learning focused on driver safety. Reavis said that “everyone is competitive and when you combine that with learning, it just sticks with you,” which is exactly what happened. Students let their competitive side run wild while still focusing on teamwork. Participants were instructed to form teams of five and each team captain was tasked with manning a small device for the game. The game consisted of questions about driver safety as well as pop culture. Teams were also given the opportunity to earn a spot in the finals from a dance competition and a simulation to try and get someone to wear a seatbelt in the car. The final round is played game-show style and whoever answered the most questions correctly won. The energy was high during ThinkFast Interactive, even though it was a long day.

After a break for Student Council groups to get dinner, students and advisors were welcomed back to MSHS with the Event Showcase. The showcase offered activities such as a glow in the dark dodgeball tournament, games, a movie and a dance presented by Rokbox Entertainment. “You included everyone by having all of those options,” said Coté, “belonging is super important for StuCo and no other FallCo has done anything like that.” Dodgeball was a popular event that many students attended and participated in. Although the team of advisors “absolutely destroyed us” said Salladay, they still had a lot of fun. The dance was even more popular and Rokbox provided the music and light show that was perfect for FallCo attendees to let loose. “At this dance, you don’t know everyone but it was still really fun,” said Foky, “Everyone seemed happy to be there and super excited.” These events gave students even more of an opportunity to bond with their peers and build unforgettable relationships.

MSHS StuCo, admin and StuCo advisor Alice Stoneback especially were the reasons why FallCo was this remarkable and amazing. They put in lots of work for this year’s FallCo, as it is the last two-day conference for the entire state. For all other conferences to come, there will be four one-day regional conferences. Manitou had the opportunity to host the last of what FallCo exists as now, and MSHS’s Student Council put on an amazing event that set the standard for future Fall Conferences very high. The 14,000 ft View is sure to be remembered and used as an example of an amazing and eye-opening leadership experience.