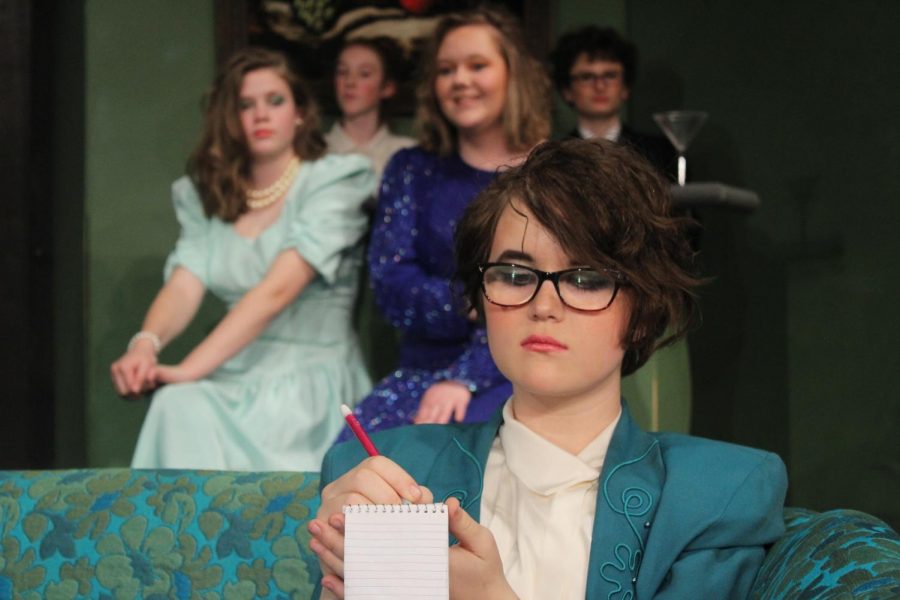 JC Aurand (9) has worked before with Wendy Harms in other productions at the middle school, including last year's play, where she played the lead role.

The Fall Play this year was a comedic murder mystery called “13 Past Midnight”, and with a cast made almost entirely of underclassmen, it became a learning opportunity for many.

Two years ago, the theater department lost 14 seniors that were an active part of the plays and musicals. To make up for that loss, and lack of upperclassmen involved in theater, a younger and newer group of actors were cast for this year’s play. Wendy Harms, who is the middle school theater teacher as well as the high school teacher, knew several freshmen coming into high school that she had worked with in productions before. There was also an upperclassman transfer student who joined the cast: Morgan Fisher (11). “It’s a necessity. It’s rebuilding the program every six years or so,” Harms said.

There were only three upperclassmen who had parts in the play who had done a production before at MSHS. Abi Beebe (11) was one of them. As one of the few returning members, she took notice to fresh cast as well. “It was definitely new– We’re really excited that so many underclassmen are joining the theater family,” Beebe said. “This was the first show, or one of the first shows, for many of the cast members, but it was a wonderful learning experience for everyone.”

Auditions for the Fall Play were within the first two weeks of school and rehearsals went all the way up the the opening night in the first week of November. For two and a half hours, three days a week, the cast and crew put together a set and ran through the play again and again. Closer to the opening night, however, they crammed in even more rehearsals.

James Reiter, the director, and Harms, the technical director, were looking for a play specifically to work in the new cast. “One of the things about this piece was it gave a lot of people a chance to do some acting without having to carry huge amounts of the show,” Harms said. There was a total of ten people who were cast who either hadn’t performed in a play before or are new to MSHS. In the end, they decided on the comical murder mystery “13 Past Midnight”.

The fresh cast still had no problem with portraying all the roles “beautifully”, according to Beebe. “We all thought the casting was absolutely perfect, and every person definitely brought life to their role.”

Despite the challenge of new faces and talent to work with, the cast of “13 Past Midnight” pulled through. “I hope the cast found a home in theater– and that they come back to audition for many, many more shows,” said Beebe.